How a once enterprise-only technology was brought to Wi-Fi routers – and what challenges we have tackled.

Once upon a time, we protected ourselves against cyber attacks by installing antivirus programs on computers. Then we entered the IoT era in which everything is connected – even baby monitors and video doorbells can be hacked. Tech-savvy users have long learned to set up firewall rules, but no matter how granular they are, the rules are static by nature.

What if we can have automatic, network-wide protection that keeps itself up to date? This was the question we had in mind when designing the Synology Router Manager (SRM) 1.2. The answers were two new packages.

Safe Access is DNS- and IP-based. It integrates several external databases (including Google Safe Browsing) that identify domains and IPs related to malware, phishing, botnets, command and control servers, social engineering, etc. When a device in the network attempts to access the blacklisted destinations, Synology Router prevents the connection from even being established.

Threat Prevention, on the other hand, is signature-based. It monitors incoming and outgoing traffic using Deep Packet Inspection (DPI) – not just checking the domain or IP – and is able to drop any malicious packet detected in real time. In addition to Internet attacks, Threat Prevention can alert you to inappropriate user behavior, such as sending passwords through unencrypted HTTP traffic.

Both packages work automatically. You can review the event logs and adjust the actions, but even if you don’t, they still silently protect you in the background.

Nevertheless, there used to be another critical difference between them: performance.

The technology behind Threat Prevention, called Intrusion Prevention System (IPS), has been an integral part of many enterprises’ security defenses. Because it inspects network packets using DPI, it can take a serious toll on the CPU and memory, dragging down the Internet speed overall.

Enterprises can afford an IPS because they can afford to use high-end hardware, some with purpose-built security processors. An enterprise firewall easily goes beyond US$1,000 – an exorbitant price for most homes and small offices. Therefore, when Synology first made IPS available on our Wi-Fi routers, users had to make a choice: business-grade security or Internet speed.

For most tech products, the story ends here: we live with the fact that we cannot always have the best of both worlds. Not this time, though.

How software changed the game

When building SRM 1.2, a huge amount of effort was dedicated to enhancing IPS performance. The key factors were CPU and memory usage, so after extensive research, the following changes were made:

So, what difference do they make?

We put both versions to test in the real world. Both were updated to use the same set of the latest signatures. The results show that the new Threat Prevention was able to detect a higher number of malicious events, as its lower CPU and memory usage enabled it to process significantly more connections per second (CPS). 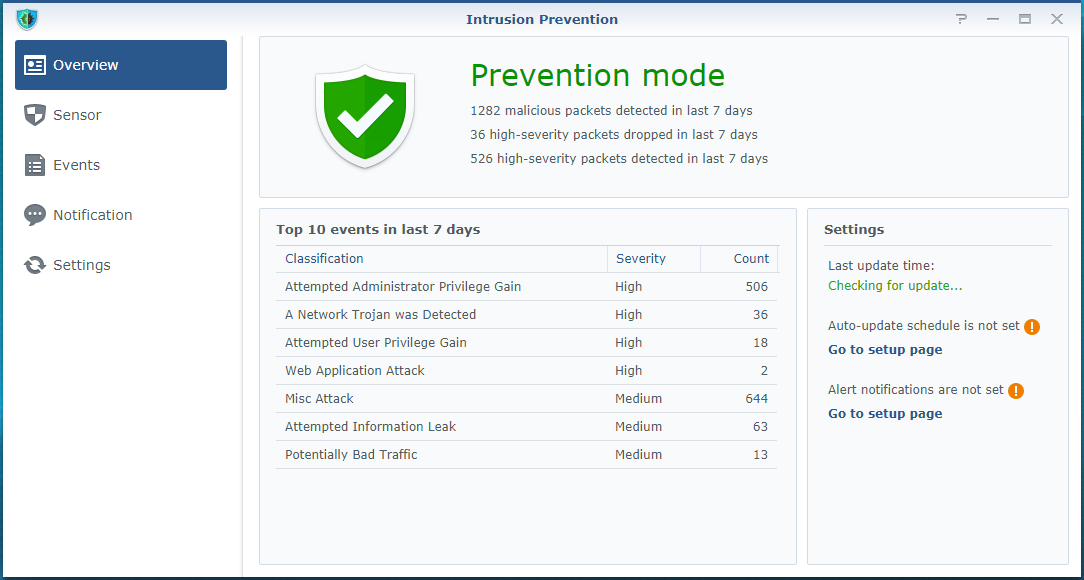 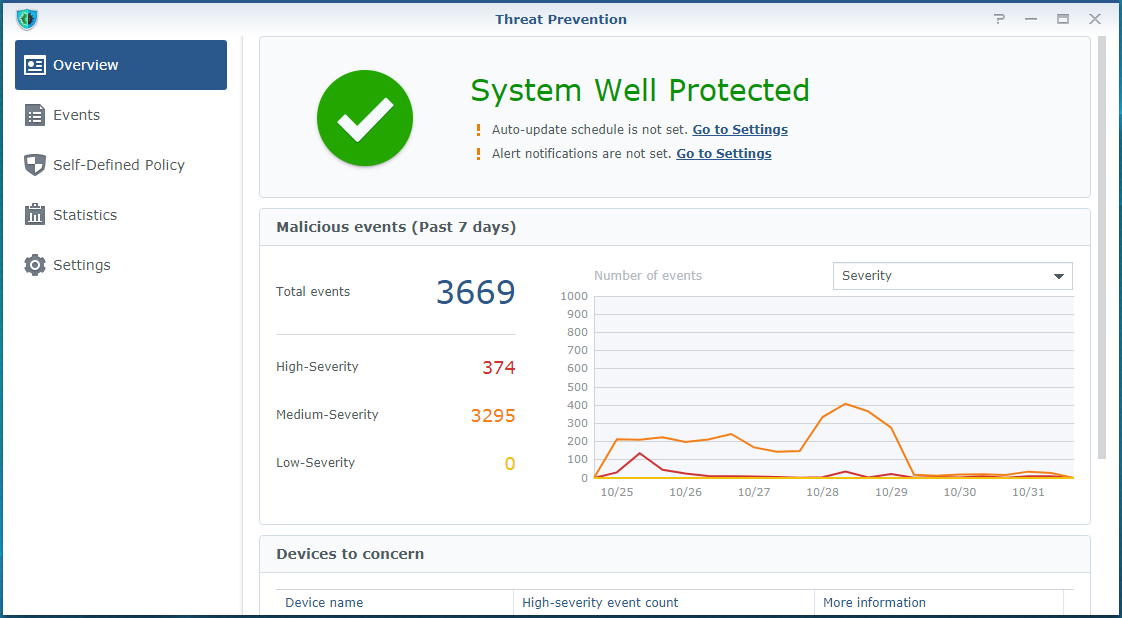 More importantly, it leads to a dramatic increase in performance. Take Synology RT2600ac as an example: the throughput jumped from sub-100 Mbps to close to Gigabit speeds. Similar results were observed on RT1900ac.

Why is this important?

According to Verizon’s report in 2018, only 1.8% of the security incidents were targeting small businesses, yet 34.1% of those that led to confirmed data breach had small businesses as their victims, meaning most of them had inadequate defenses comparing to enterprises. The same applies to home users.

IPS can provide an additional, effective layer of protection to most networks, which is why we put together all these efforts to optimize it for Synology routers – and we made that happen.

Are you using the security features in SRM 1.2? What do you think about network security on Wi-Fi routers in general? Tell us on Synology Community.

* Threat Prevention is currently available on Synology RT2600ac and RT1900ac.

DNS over HTTPS: things to consider when you go “private”
What it means for privacy, security, and parental controls, and whether there’s a way to have them all. The term “DNS over HTTPS (DoH)” has been hitting the headlines in the past month: Google announced its general availability in June, and in July, Mozilla was nominated for “2019 Internet Villains” by the UK Internet Services Providers’ Association (ISPA) for introducing DoH to Firefox (the nomination was later withdrawn due to a global outcry). This epitomizes how a new technology is disrupting existing implementations – but not just to ISPs and government agencies. Let’s take a look at what benefits DoH
RouterDoHNetwork SecurityWeb Privacy
Home network security in the IoT era
The Internet is a double-edged sword According to Cisco Visual Network Index (VNI), there will be an average of 35 IoT devices in every household by 2020, which means people will have plenty of smart devices installed in their homes, such as smart locks, fridges, and TVs. While we enjoy the luxury technology brings, the Internet we use at home has become a sitting duck for hackers, causing more and more malicious attacks at the same time. On top of that, since devices we use are often connected under the same network, once a device has been attacked, hackers can
RouterNetworking
Big advances coming to data management in 2023
Building an efficient data management infrastructure is crucial for businesses of any size. As organizations continue to increase the amount of data they acquire, consume, and share across departments and with the outside world, demand for flexible and reliable storage solutions is stronger than ever. The coming year will see a series of updates to our DiskStation Manager (DSM) operating system and Synology C2 cloud infrastructure that will deliver better scalability, dependability, and mobility to new and existing deployments. These will bring teams the agility to manage data at scale while maintaining the security and control they need to streamline
C2NASCollaborationData ManagementDriveDSMStorageWORM
Building reliable backup repositories with Synology storage systems
Safe and intelligent storage systems are key to keeping a business running. This is no different for backup systems used to protect IT infrastructure. Synology storage solutions include our Active Backup suite, a powerful family of applications introduced in 2018 to safeguard endpoints, servers, VMs, and even Microsoft 365 and Google Workspace accounts. At the same time, many businesses run third-party backup software to store backups on their Synology system. In fact, Synology's range of converged NAS/SAN storage systems has been deployed at tens of thousands of companies worldwide, including nearly half of Fortune 500 companies, to store business-critical data and
NASActive BackupActive InsightBackupDSMVirtualization
How we’re supercharging video surveillance in 2022
Simply listing the new features in Surveillance Station 9.0 belies the magnitude of improvements to our video surveillance suite. As we release the ninth iteration of one of our signature products, we are proud to say that users large and small will find securing their premises an altogether more pleasant and integrated experience. In Surveillance Station 9.0, everything is simply more within reach. An all-new experience When you first access the new Surveillance Station, what you’ll immediately notice is the sleek dark interface. Adopting many users’ preferred look is one small way we are making monitoring a better experience, but
SurveillanceDeep Video AnalyticsSecuritySurveillance Station
Try these new tools to protect your IT this holiday
Work pressure and irregular staffing make holiday seasons the perfect occasion for threat actors. Besides direct attacks on your infrastructure, phishing and other scams targeting employees also take a flight in the weeks before Christmas. Routine maintenance becomes difficult with fewer hands to do the job. Add working from home to the mix, and it looks like you (sysadmin, reboot consultant, designated IT person) will be holding the fort this holiday. Do you have other plans for your holidays? Luckily, so do we. That’s why we’ve worked on some tools to make large deployments easier to manage and easier to
NASActive InsightBackupHyper BackupSecure SignInSecurity