Is a NAS drive worth it, or is it just another gimmick? Let’s find out.

When it comes to choosing hard drives for a NAS device, many users may pinch pennies and make do with lower-cost desktop drives. Some are probably not even aware that desktop drives are not designed for closely nested environments like a NAS. With greater reliability, NAS drives are particularly suitable for a NAS environment.

With the heat-resistant and anti-vibration design, a NAS HDD is tailor-made for a NAS server, providing 24/7 operation with higher speeds. A NAS drive solution may be a substantial investment in the beginning, but its high level of stability and reliability makes it cost-effective in the long run, which realizes a lower total cost of ownership (TCO) and a better return on investment (ROI).

Continuous operation and RAID configuration are what makes NAS HDDs stand out from desktop HDDs. A NAS HDD is designed to run for weeks on end, while a desktop HDD can only read and write data for hours at a time. A NAS HDD is also built specifically for RAID setup. By combining multiple drives into one single logical unit, RAID configurations provide data redundancy, thus protecting data against drive failures.

Storage capacity, speed, and performance are not the only deciding factors when purchasing a NAS hard drive anymore. An ideal NAS HDD should meet the following requirements: higher workload rate and Mean Time Between Failures (MTBF), thermal control and vibration tolerance, and add-on services.

Desktop HDDs only operate when computers are on, while NAS HDDs can be up and running 24/7. Desktop HDDs are likely to fail under long-term continued operation, so you need NAS drives that are purpose-built for continuous operation especially in large NAS deployment.

To ensure maximum uptime, you should take workload rate and MTBF into account. Workload rate means the amount of user data transferred annually (TB/yr), while MTBF refers to the average time during which a device functions before it reaches end of life. Generally speaking, the average workload for desktop HDDs is 55 (TB/yr), while you cannot even see MTBF on the spec sheet because continuous operation is not a concern when designing a desktop HDD. A NAS drive, by contrast, provides a higher workload rate and longer MTBF, ensuring greater durability and reliability. Take IronWolf Pro as an example. It offers a workload rate of 300TB per year with an MTBF of 1.2 million hours.

Closely nested drives operating at the same time inside a NAS can result in vibration, noise, and heat. In addition, hard drives usually have high spindle speeds (RPM) so that disks can rotate at a faster speed and read data faster. Low spindle speeds create less vibration and noise, but they become a hindrance to achieving better read/write performance. Vibration is especially undesirable in multi-bay or rack systems, for it hampers stability of hard drive operation and even leads to data loss.

With NAS drives, you can rest assured that you don’t have to trade off speed for quieter and cooler drives. Nowadays, NAS drive manufacturers have developed anti-vibration technologies to prevent drives from creating too much vibration and noise, while maintaining high-speed performance at the same time. For instance, every IronWolf hard drive is equipped with built-in rotational vibration (RV) sensors that can reduce vibration in multi-drive NAS systems, maximizing system availability and performance.

Aside from performance and features, you should also consider added value that comes along with the drives you purchase. Select NAS drives that offer add-on services, such as warranty, drive health management, and data recovery services that are tailored to your needs.

To prevent data loss, S.M.A.R.T (Self-Monitoring, Analysis and Reporting Technology) is usually employed to analyze 20 parameters and will send out a warning upon detecting imminent drive failures. IronWolf Health Management (IHM) brings reliability to a higher level as it monitors hundreds of parameters with adaptive algorithms to keep close tabs on drive health status, ensuring a robust system environment. 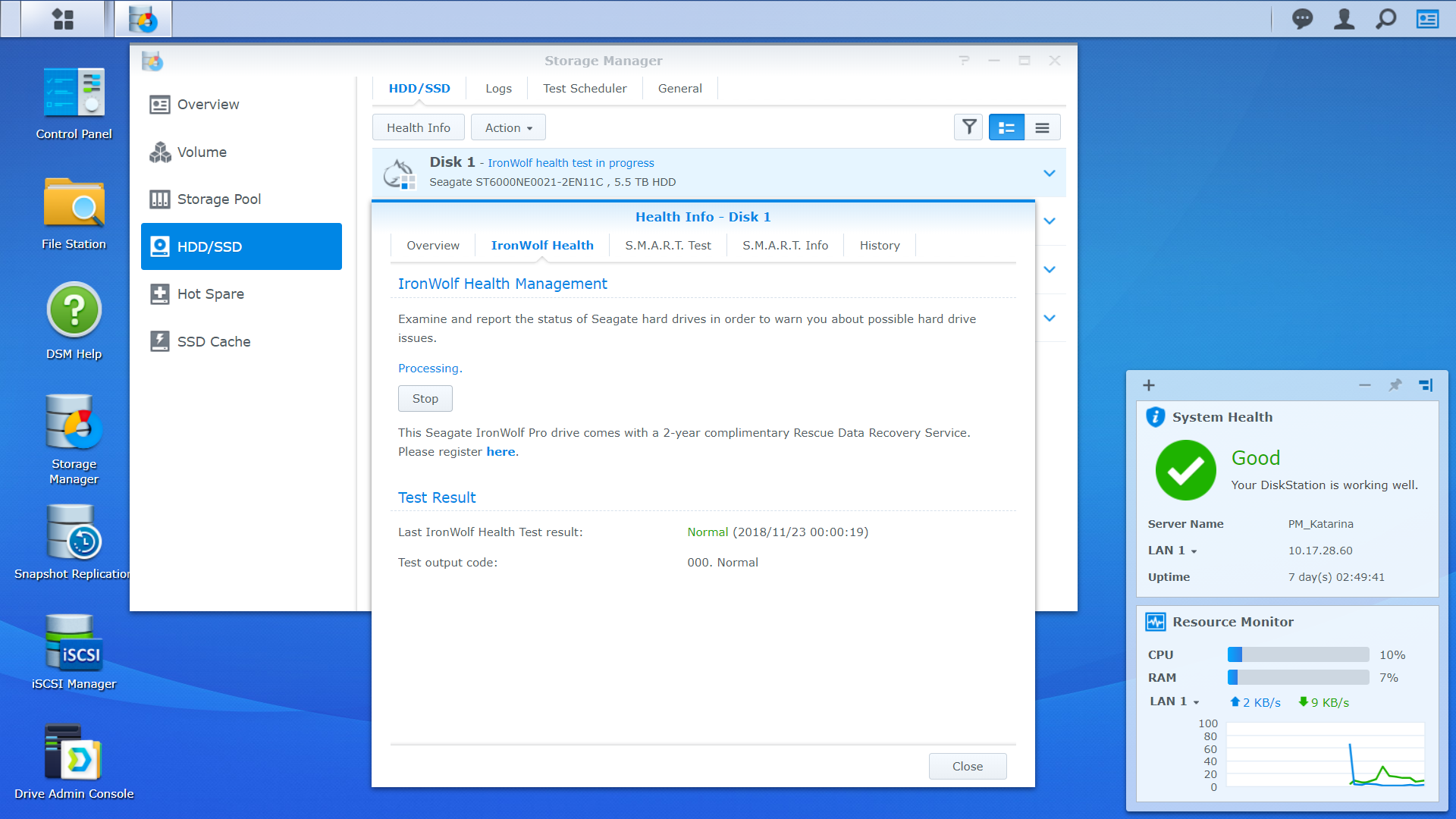 Should a drive failure occur, users will probably turn to hard disk data providers. It could be very pricey, and these rescue data efforts may still end up in vain. Therefore, a recovery plan included with your purchase will play a pivotal role in your choice of NAS drives. For example, Seagate’s Rescue Recovery Data Plan allows their users to seek professional help from global data recovery specialists in the event of catastrophic data loss.

It’s all about reliability

A NAS drive allows for 24/7 multi-user access, and its reliability is something we don’t want to miss.

Don’t let hard disk failures, vibration, and heat commonly found in desktop drives become stumbling blocks to your NAS system. Bear the above factors in mind when purchasing NAS drives, and then hopefully you’ll find ideal ones that best suit your needs.

Come share with us what’s on your NAS wishlist on the Community.

Try these new tools to protect your IT this holiday
Work pressure and irregular staffing make holiday seasons the perfect occasion for threat actors. Besides direct attacks on your infrastructure, phishing and other scams targeting employees also take a flight in the weeks before Christmas. Routine maintenance becomes difficult with fewer hands to do the job. Add working from home to the mix, and it looks like you (sysadmin, reboot consultant, designated IT person) will be holding the fort this holiday. Do you have other plans for your holidays? Luckily, so do we. That’s why we’ve worked on some tools to make large deployments easier to manage and easier to
NASActive InsightBackupHyper BackupSecure SignInSecurity
In pursuit of reliability
A chain is only as strong as its weakest link One thing many people overlook in a storage system is how the actual drives that go into the system play a vital role in determining the overall dependability of the solution. At the same time, business environments also demand more. They require performance and predictability. Why we're introducing our HAT5300 enterprise hard drives Synology can control what components we use in our NAS. We also design and thoroughly test our DiskStation Manager (DSM) operating system and software ecosystem on our devices to ensure they work well together. But how do
NASCompatibilityHDDReliabilityStorageSynology NAS
Data Privacy Day: one resolution for 2021
When it comes to keeping your personal information secure, don’t take anyone at their word — use encryption. Since the first Data Privacy Day back in 2007, online privacy threats have multiplied. On top of more traditional threats like phishing — which has been around since at least the early 1990s — users today face more sophisticated risks, including those linked to the widespread adoption of the Internet of Things (IoT). However, “older” threats remain highly relevant, as evidenced by a recent wave of ransomware attacks that not only lock user data but now have evolved to also threaten to leak
NASData PrivacyEncryptionWeb Privacy
The future for data management, hybrid-cloud, and more
Synology introduced an entirely redesigned DiskStation Manager (DSM) in the online event, 2021 AND BEYOND. DSM is the unified operating system powering Synology data management solutions, and version 7.0 brings new technologies for storage, backup, and hybrid cloud. "Unprecedented quantities of data have undergone processing, whether for data analytics, artificial intelligence, Internet of Things, telemedicine, or for countless more innovations. All of this is making a huge impact on our lifestyle and the way we do business, forming a "data economy" where owning more data gives you a competitive edge against others," said Philip Wong, Synology founder and Chief Executive
C2NASSynology 2021
TLC vs. QLC SSDs: What are the differences?
We’ve talked about how we can use SSD cache to reduce latency and accelerate transfer speeds. We’ve also explained the differences between consumer and enterprise SSDs, and why for sustained performance reasons we suggest the latter. Consumer and enterprise SSDs are two broad categories that encompass a wide range of performance profiles. Due to differences in how vendors test and rate their products, buying based off advertised numbers is not enough. In today’s post, we’ll explore how NAND types affect performance significantly, and why this should matter to your next purchasing decision. NAND flash types NAND flash memory data is
NASQLCSSDTLC
10 security tips to keep your data safe
The past years have seen a dramatic escalation in cybersecurity threats. According to a report by The New York Times, more than 200,000 organizations were attacked with ransomware in 2019, a 41% rise from the year before. To help you protect yourself, we’ve compiled a list of important data security settings that are often overlooked. At the end we’ve included bonus tips that could help you ensure data integrity -- another pillar of data protection. Note: Most of the settings listed below can only be accessed and modified by a user account with administrative rights. Tip 1: Disable the default
NASDSMSecuritySynology NAS