We’ve talked about how we can use SSD cache to reduce latency and accelerate transfer speeds. We’ve also explained the differences between consumer and enterprise SSDs, and why for sustained performance reasons we suggest the latter.

Consumer and enterprise SSDs are two broad categories that encompass a wide range of performance profiles. Due to differences in how vendors test and rate their products, buying based off advertised numbers is not enough. In today’s post, we’ll explore how NAND types affect performance significantly, and why this should matter to your next purchasing decision.

Since SSDs hit the market, capacities have grown larger and larger. Current industry trends are to reduce costs while increasing storage capacity. This has led to the development of denser memory cells while slowly approaching (not yet there) the cost of traditional hard drives.

The pursuit of cheaper and larger drives has caused the decline of SLC and MLC-based SSDs. TLC is now mainstream and holds the largest market share. QLC is still relatively new, but we expect its low costs will draw in buyers, especially since it is often pitched as an HDD replacement.

NAND memory cells have only a finite number of program-erase (P/E) cycles (write cycles) before they wear out. Going into details is outside the scope of this post, so just know that higher density cells have less endurance than low-density ones, e.g. MLC will usually last longer than TLC.

While you can generally follow that MLC will be faster than TLC, and TLC will be faster than QLC, new SSDs contain multiple optimization methods that help cover up or negate the shortcomings of slower NAND. A great example of this is “SLC-caching”, where unused areas of a drive will act as pseudo-SLC NAND. This allows for very good performance for shorter, burst-type workloads, as is often the case for most PCs and client-computing environments. This can be clearly seen in our previous consumer and enterprise SSD article.

There’s a drive for that

Unlike the mature HDD market, when shopping for an SSD you will find enough makes and models to give you choice anxiety. What we’ll be looking at today is that while consumer TLC and even QLC drives often claim impressive performance figures on the surface, when examined under practical situations, the true performance profiles of these drives are revealed.

For file transfer tests, we’ll use AJA System Test, a tool designed primarily for content creators to verify their storage systems are able to support ingesting high-resolution streams. We set it to write a 64GB file to the system and then read it back. This is still a light workload but will be representative of users moving a large file around. 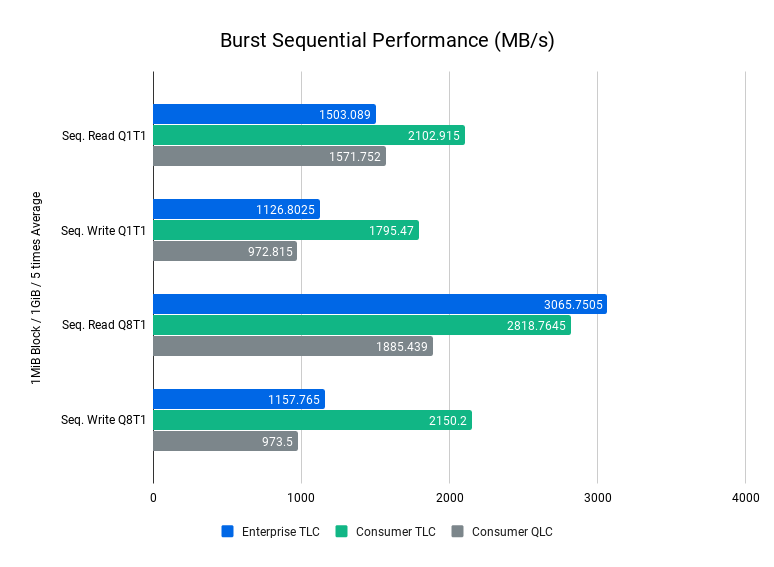 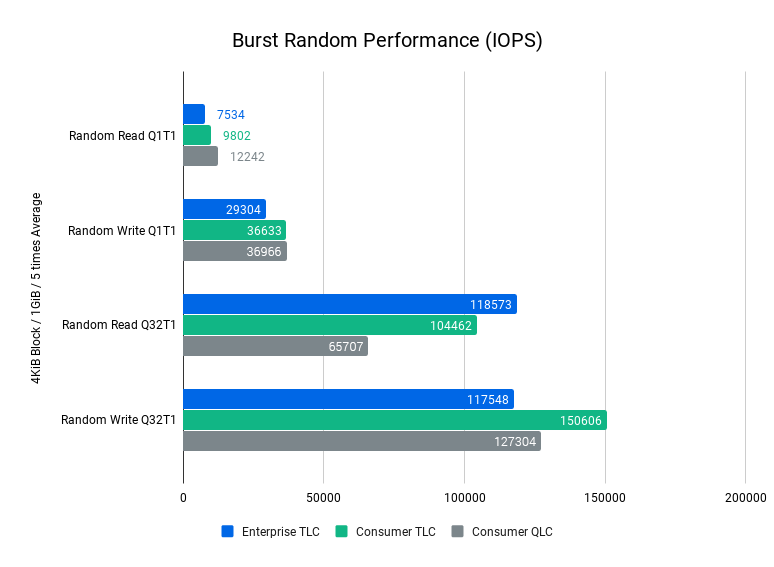 Across short, burst-type tests, all drive groups did very well, as expected for these types of synthetic benchmarks. Based on the performance numbers here, you’ll be forgiven if you concluded that you’ll see no differences in real-world usage. Ample SLC-cache sizes mean the even slower QLC drives perform great.

The previous tests were conducted while the drives were empty. That gave drives with dynamic SLC-caching lots of room to work with. We filled each drive to 65%, gave them a few minutes to rest, then continued using AJA System Test to generate the same 64GB write then read workload.

Compared to when completely empty, our enterprise drives performed within the margin of error. Consumer TLC drives dropped off a bit in read performance, while still maintaining good write speeds, nothing noticeable in regular day-to-day usage. It goes without saying that the QLC group’s performance regression here is significant.

We used a whole-drive fill test to obtain the steady-state performance of the drives. This test is also indicative of drive workloads when used as an SSD cache on a busy NAS, as they’ll continuously be filled with recently accessed data. This test will exhaust any SLC-caching mechanisms on the drive as it does not give it any time to recover. 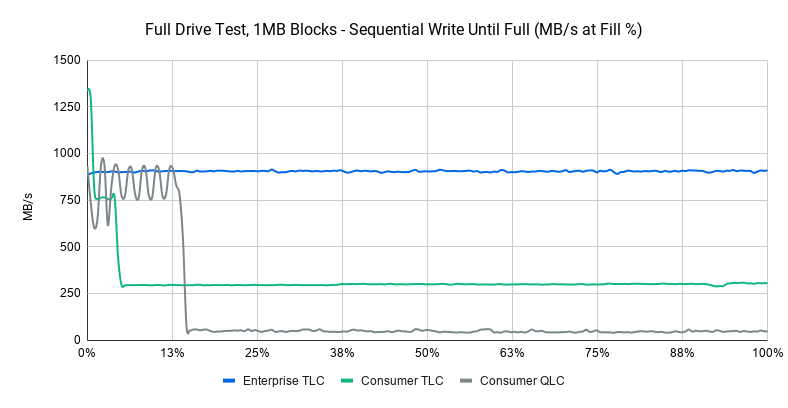 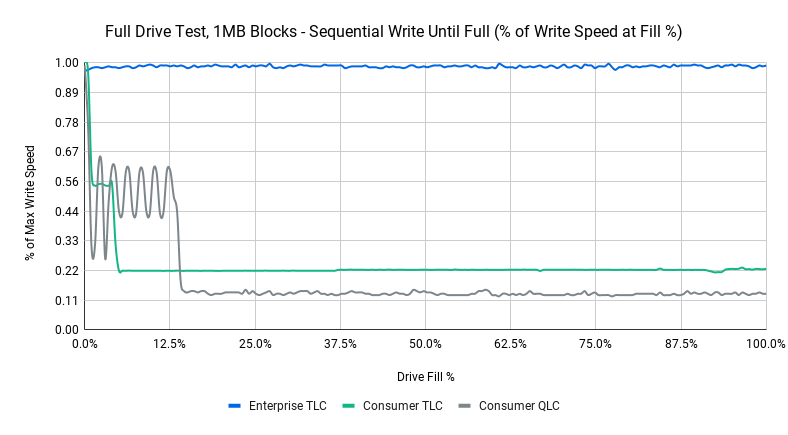 In the graphs, the horizontal axis represents the percentage of storage capacity written to. The first one is the raw speed average for our groups. The second shows the speed as a percentage of the maximum in this test. As expected, drives meant for enterprise environments shine the most here. Consumer TLC drives started out fast, but quickly crashed as they used up their caches. The QLC drives are actually configured with fairly large caches, enabling them to stay fast for longer. However, the reason behind this is to mask the absolutely poor write speeds once the cache is full and the NAND is written to directly. Here, we’re seeing worse sequential write speeds than HDDs.

On the other hand, even though the enterprise drives we used today are mostly entry-level models, and rated for read-intensive workloads, they are still able to provide stable sustained performance. Higher-end (pricier) models usually support higher write speeds and DWPD ratings.

It is always important to thoroughly check the advertised performance figures for SSDs. Testing methods and conditions are different between manufacturers, and for consumer drives, are often only in burst-type workloads. Even so, consumer SDDs are still cost-effective upgrades to considerably speed up your PC or NAS storage compared to HDDs. However, take note that once you start applying heavier and longer workloads to them, their performance will drop, sometimes significantly.

QLC drives are great for their intended purposes, that is, low-cost drives to replace HDDs in read-intensive workloads. While peak performance can rival even high-end TLC-based drives, their performance in steady-state situations leaves a lot to be desired. Unlike with the quick adoption of TLC NAND in both high-end consumer and enterprise drives, unless steady-state QLC performance improves significantly, we don’t see them becoming a TLC replacement anytime soon.

For usage in a NAS, you can see why we have always advocated using only enterprise-grade drives. In addition to being rated for higher endurance, performance consistency is extremely important, especially when you are providing storage to VMs and other critical infrastructure. There is simply no room for variable performance based on workload.

Big advances coming to data management in 2023
Building an efficient data management infrastructure is crucial for businesses of any size. As organizations continue to increase the amount of data they acquire, consume, and share across departments and with the outside world, demand for flexible and reliable storage solutions is stronger than ever. The coming year will see a series of updates to our DiskStation Manager (DSM) operating system and Synology C2 cloud infrastructure that will deliver better scalability, dependability, and mobility to new and existing deployments. These will bring teams the agility to manage data at scale while maintaining the security and control they need to streamline
C2NASCollaborationData ManagementDriveDSMStorageWORM
Building reliable backup repositories with Synology storage systems
Safe and intelligent storage systems are key to keeping a business running. This is no different for backup systems used to protect IT infrastructure. Synology storage solutions include our Active Backup suite, a powerful family of applications introduced in 2018 to safeguard endpoints, servers, VMs, and even Microsoft 365 and Google Workspace accounts. At the same time, many businesses run third-party backup software to store backups on their Synology system. In fact, Synology's range of converged NAS/SAN storage systems has been deployed at tens of thousands of companies worldwide, including nearly half of Fortune 500 companies, to store business-critical data and
NASActive BackupActive InsightBackupDSMVirtualization
Try these new tools to protect your IT this holiday
Work pressure and irregular staffing make holiday seasons the perfect occasion for threat actors. Besides direct attacks on your infrastructure, phishing and other scams targeting employees also take a flight in the weeks before Christmas. Routine maintenance becomes difficult with fewer hands to do the job. Add working from home to the mix, and it looks like you (sysadmin, reboot consultant, designated IT person) will be holding the fort this holiday. Do you have other plans for your holidays? Luckily, so do we. That’s why we’ve worked on some tools to make large deployments easier to manage and easier to
NASActive InsightBackupHyper BackupSecure SignInSecurity
In pursuit of reliability
A chain is only as strong as its weakest link One thing many people overlook in a storage system is how the actual drives that go into the system play a vital role in determining the overall dependability of the solution. At the same time, business environments also demand more. They require performance and predictability. Why we're introducing our HAT5300 enterprise hard drives Synology can control what components we use in our NAS. We also design and thoroughly test our DiskStation Manager (DSM) operating system and software ecosystem on our devices to ensure they work well together. But how do
NASCompatibilityHDDReliabilityStorageSynology NAS
Data Privacy Day: one resolution for 2021
When it comes to keeping your personal information secure, don’t take anyone at their word — use encryption. Since the first Data Privacy Day back in 2007, online privacy threats have multiplied. On top of more traditional threats like phishing — which has been around since at least the early 1990s — users today face more sophisticated risks, including those linked to the widespread adoption of the Internet of Things (IoT). However, “older” threats remain highly relevant, as evidenced by a recent wave of ransomware attacks that not only lock user data but now have evolved to also threaten to leak
NASData PrivacyEncryptionWeb Privacy
The future for data management, hybrid-cloud, and more
Synology introduced an entirely redesigned DiskStation Manager (DSM) in the online event, 2021 AND BEYOND. DSM is the unified operating system powering Synology data management solutions, and version 7.0 brings new technologies for storage, backup, and hybrid cloud. "Unprecedented quantities of data have undergone processing, whether for data analytics, artificial intelligence, Internet of Things, telemedicine, or for countless more innovations. All of this is making a huge impact on our lifestyle and the way we do business, forming a "data economy" where owning more data gives you a competitive edge against others," said Philip Wong, Synology founder and Chief Executive
C2NASSynology 2021