Compatibility makes all the difference

System memory is used by practically everything on a device with compute capabilities. For a NAS, it is responsible for not only allowing the processor to run core services, additional packages, or even other operating systems via virtualization but also caching the data that is being accessed. System memory provides a small but extremely fast, temporary storage to buffer incoming and outgoing data to improve performance. 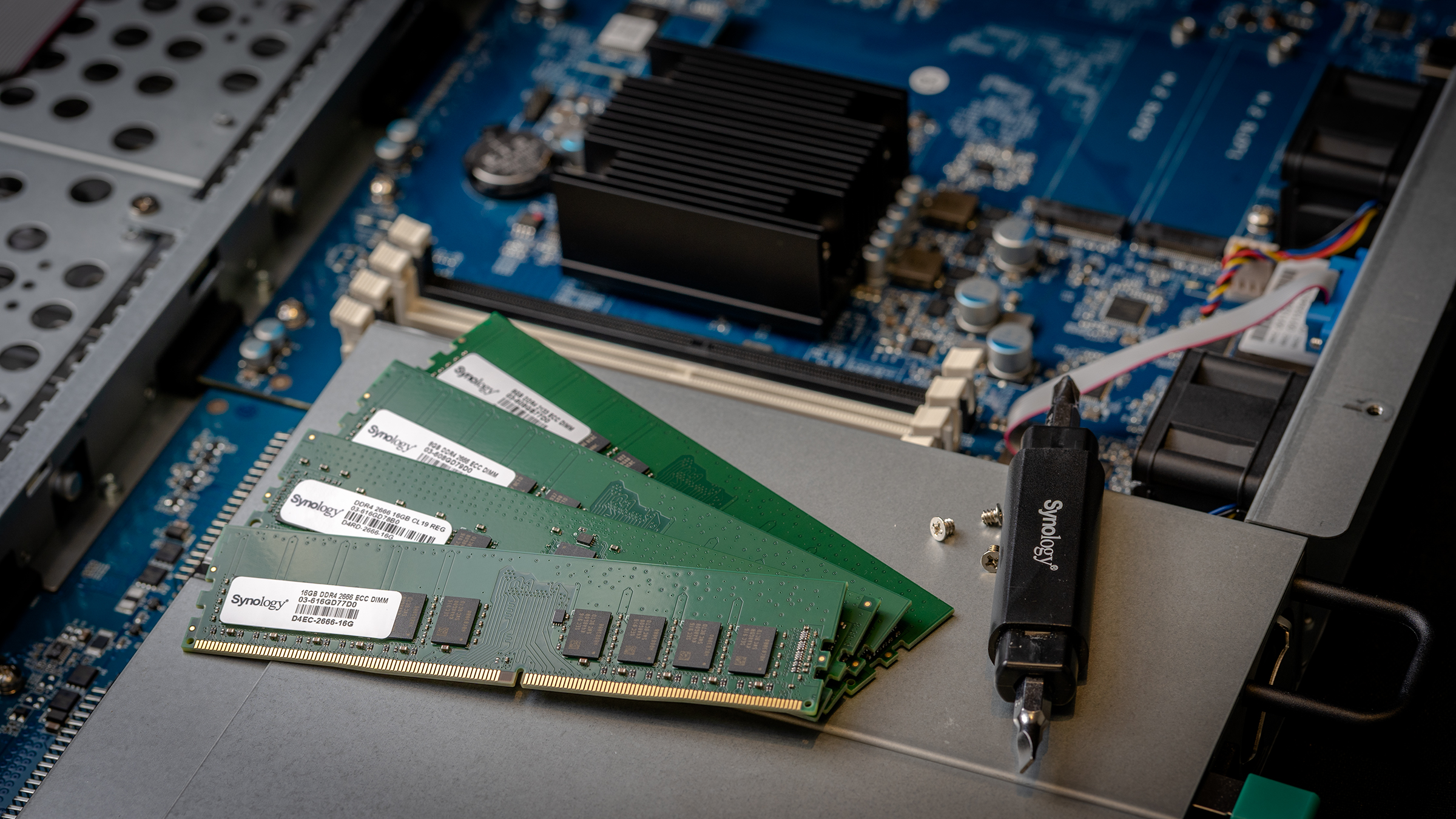 Many Synology devices support system memory upgrades. Installing additional memory modules may help your device become snappier and will potentially allow it to support additional users and services. It’s a relatively simple and cost-effective way for users to upgrade their devices to satisfy increased demands months or even years after purchasing the device.

Thousands of hours in testing

While the specifications of a memory module are primarily determined by the DRAM chips that have been chosen, the quality and consistency of it can vary even with the same chips. The only way to ensure consistency is through a rigorous testing procedure.

Each device has different design targets, depending on the form factor, performance requirements, and intended market. Before a Synology NAS model is cleared for mass production, it would need to have spent several months handling high-stress workloads and pass each test without exception. Memory modules follow the same testing regime.

Each NAS model undergoes hundreds of hours of tests for each supported memory configuration, involving continuous file transfer tests, direct memory tests, and tests that mimic various usage profiles. Testing involves not just devices in normal operation, but also seemingly more unusual ones, such as power on success rate and recovering from improper shutdowns. Devices with multiple memory slots need to undergo all of the tests for each supported memory configuration.

For example, the RS1619xs+ has four memory slots, our engineers will need to test 8 combinations of memory configuration using 8GB and 16GB ECC UDIMM modules. 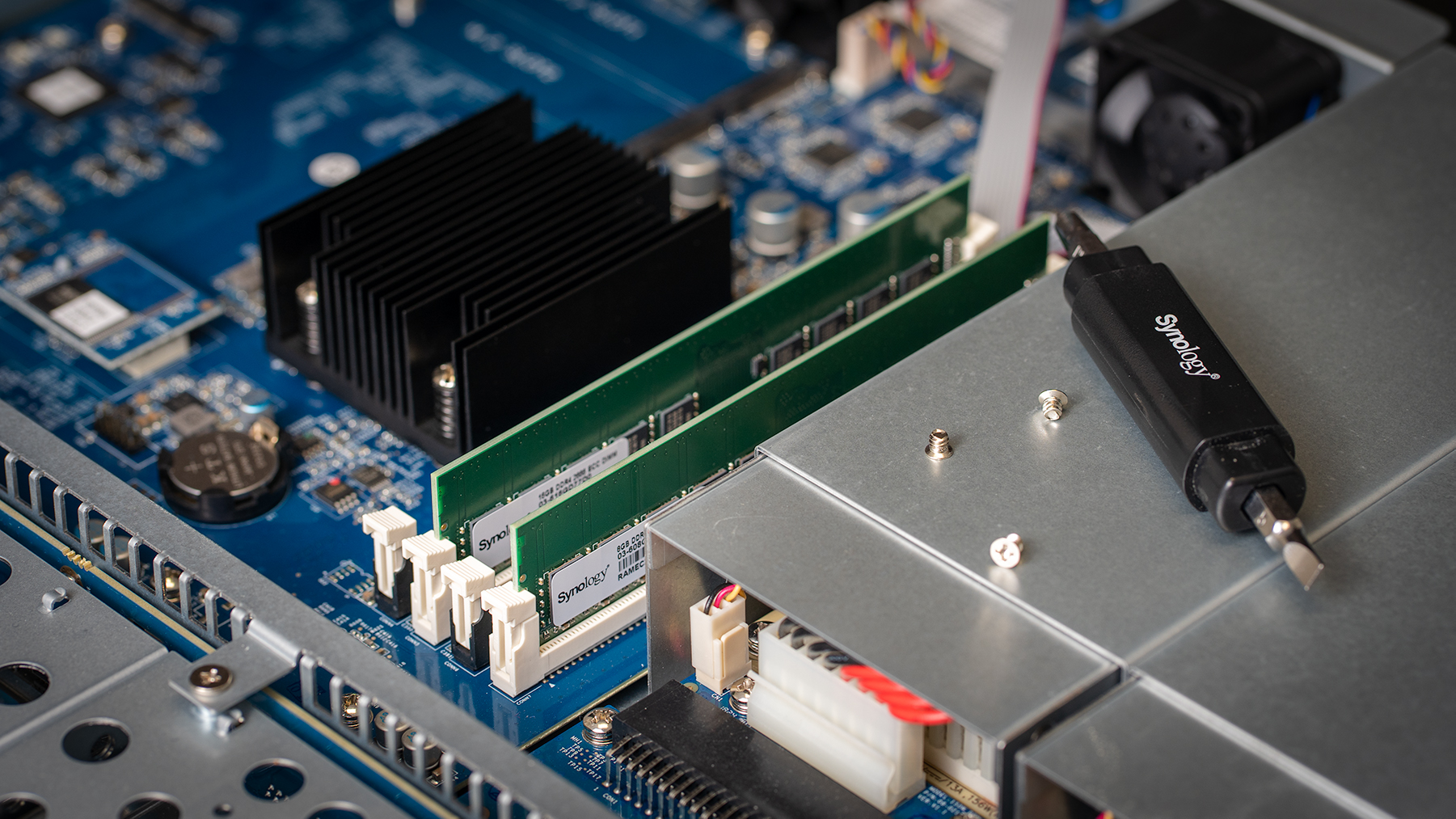 Many customers choose to purchase retail memory modules when upgrading their Synology products. As there are various memory brands on the market, it is difficult to know which modules are reliable without long-term reliability tests.

With the whole system dependent on system memory, any instability can cause corruption to data and system instability. Unvalidated memory may appear to work fine in a system, but like bit rot, serious issues may only manifest itself over time and in unpredictable ways.

Synology support teams regularly receive requests to troubleshoot stability and corruption issues, some resulting in RAID volume degradation and crashes on devices that have non-validated memory installed. In many of these cases, the stability issues were resolved by removing the 3rd party memory.

According to our stats, there are around 50 inquiries per year regarding non-authentic Synology memory modules, including boot failures, system hangs, storage volume crashes, or even data loss.

Synology is only able to guarantee compatibility with memory modules in configurations listed on our memory compatibility list. We only provide technical support in a limited capacity if your device contains memory not on the list. As memory issues can cause erratic and unpredictable behavior, it would be difficult to pinpoint the cause of issues and then provide a suitable solution for it.

For the safety of your data, it is highly recommended to choose authentic Synology memory modules for memory upgrades because they are rigorously tested for compatibility and optimum reliability – with the support of Synology’s limited product warranty.

If you need more information about Synology memory modules, you can check the tutorials and FAQ articles below.

Try these new tools to protect your IT this holiday
Work pressure and irregular staffing make holiday seasons the perfect occasion for threat actors. Besides direct attacks on your infrastructure, phishing and other scams targeting employees also take a flight in the weeks before Christmas. Routine maintenance becomes difficult with fewer hands to do the job. Add working from home to the mix, and it looks like you (sysadmin, reboot consultant, designated IT person) will be holding the fort this holiday. Do you have other plans for your holidays? Luckily, so do we. That’s why we’ve worked on some tools to make large deployments easier to manage and easier to
NASActive InsightBackupHyper BackupSecure SignInSecurity
In pursuit of reliability
A chain is only as strong as its weakest link One thing many people overlook in a storage system is how the actual drives that go into the system play a vital role in determining the overall dependability of the solution. At the same time, business environments also demand more. They require performance and predictability. Why we're introducing our HAT5300 enterprise hard drives Synology can control what components we use in our NAS. We also design and thoroughly test our DiskStation Manager (DSM) operating system and software ecosystem on our devices to ensure they work well together. But how do
NASCompatibilityHDDReliabilityStorageSynology NAS
Data Privacy Day: one resolution for 2021
When it comes to keeping your personal information secure, don’t take anyone at their word — use encryption. Since the first Data Privacy Day back in 2007, online privacy threats have multiplied. On top of more traditional threats like phishing — which has been around since at least the early 1990s — users today face more sophisticated risks, including those linked to the widespread adoption of the Internet of Things (IoT). However, “older” threats remain highly relevant, as evidenced by a recent wave of ransomware attacks that not only lock user data but now have evolved to also threaten to leak
NASData PrivacyEncryptionWeb Privacy
The future for data management, hybrid-cloud, and more
Synology introduced an entirely redesigned DiskStation Manager (DSM) in the online event, 2021 AND BEYOND. DSM is the unified operating system powering Synology data management solutions, and version 7.0 brings new technologies for storage, backup, and hybrid cloud. "Unprecedented quantities of data have undergone processing, whether for data analytics, artificial intelligence, Internet of Things, telemedicine, or for countless more innovations. All of this is making a huge impact on our lifestyle and the way we do business, forming a "data economy" where owning more data gives you a competitive edge against others," said Philip Wong, Synology founder and Chief Executive
C2NASSynology 2021
TLC vs. QLC SSDs: What are the differences?
We’ve talked about how we can use SSD cache to reduce latency and accelerate transfer speeds. We’ve also explained the differences between consumer and enterprise SSDs, and why for sustained performance reasons we suggest the latter. Consumer and enterprise SSDs are two broad categories that encompass a wide range of performance profiles. Due to differences in how vendors test and rate their products, buying based off advertised numbers is not enough. In today’s post, we’ll explore how NAND types affect performance significantly, and why this should matter to your next purchasing decision. NAND flash types NAND flash memory data is
NASQLCSSDTLC
10 security tips to keep your data safe
The past years have seen a dramatic escalation in cybersecurity threats. According to a report by The New York Times, more than 200,000 organizations were attacked with ransomware in 2019, a 41% rise from the year before. To help you protect yourself, we’ve compiled a list of important data security settings that are often overlooked. At the end we’ve included bonus tips that could help you ensure data integrity -- another pillar of data protection. Note: Most of the settings listed below can only be accessed and modified by a user account with administrative rights. Tip 1: Disable the default
NASDSMSecuritySynology NAS